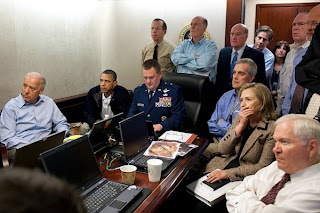 Citações no The New Yorker, com links para as fontes:

“Anyone who would question that the perpetrator of mass murder on American soil didn’t deserve what he got needs to have their head examined.” —Barack Obama

“You’ve got to give [Obama] a lot of credit for making the decision to have SEAL Team 6 conduct the raid that got bin Laden. There’s no question that was his responsibility, and I think he handled it well.” —Dick Cheney

“This is our time to break the back of Al Qaeda.” —Mike Rogers, a Republican congressman for Michigan

“We cannot continue down this road of permanent warfare.” —Lynn Woolsey, a Democratic congresswoman for California

“We might ask ourselves how we would be reacting if Iraqi commandos landed at George W. Bush’s compound, assassinated him, and dumped his body in the Atlantic.” —Noam Chomsky

“Arbitrary killing is not a solution to political problems.” —Omar bin Laden son and other unnamed sons of bin Laden, in a statement

“Unless the state department can certify to Congress that Pakistan was not harboring America’s number-one enemy, Pakistan should not receive one more cent of American aid.” —Ted Poe, a Republican congressman for Texas

“Counterterrorism coöperation with Pakistan is in our national security interests.” —Mark Toner, a spokesman for the State Department

“There are currently no plans to pull the C.I.A.’s chief of station out of Pakistan.” —An unnamed U.S. official

“I don’t relish seeing the photos, but as part of my responsibility, I’ll see them.” —Mark Udall, a Democratic senator for Colorado